Food composition tables (FCTs) are important tools to convert food amounts into nutrient intake which are fundamental to many activities related to nutrition. Ideally, they should be country-specific due to several factors that can affect the composition of foods among countries.

Comprehensive FCTs are not available for most countries in the Congo Basin region and to try to help felling this gap, the International Center for Research in Agroforestry (ICRAF), also known as World Agroforestry Centre put together a FCT including 517 food entries for use in the region. The initiative was part of the GML project, developed by Erasmus Tang.

The present consultancy aims to review and assess the quality of the compiled FCT and to suggest appropriate changes to improve the FCT.

This website was created to share all relevant files and videos to document the comprehensive review of the compiled FCT.

Timing and objectives of the consultancy

The consultancy ran from March 1st to December 21st 2021 for a total os 60 working days with the following objectives: 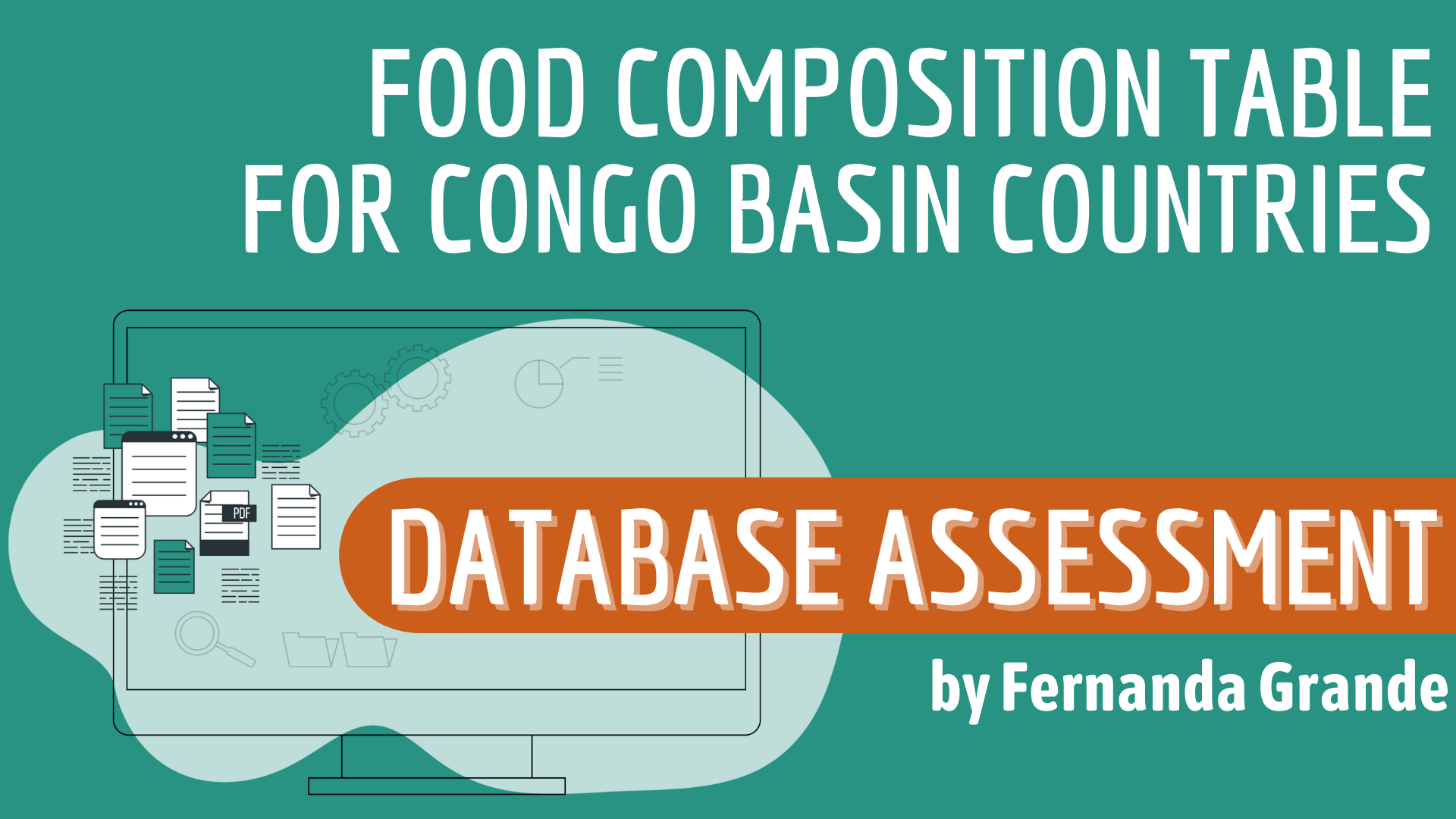 References used during the review and assessment

The review will follow the standards and guidelines published by the International Network of Food Data Systems (INFOODS). For an easier reference, the main documents and publications that will be further mentioned during the review are listed (and linked) below:

The “User Database” corresponds to the information that will be made available for users. A systematic checking was was performed in this level of the database was performed according to the FAO/INFOODS Guidelines for Checking Food Composition Data prior to Publication of a User Table/Database before starting a detailed data checking of the metadata

The main findings are listed below:

Issues to check and/or review

The excel file where the assessment was performed and the explanatory video are linked below (please see “related videos and files”).

Additionally, to access the quality User Database the screening questions proposed by the ‘FAO/INFOODS Evaluation framework to assess the quality of food composition tables and databases’ were used. This tool was developed to assess the data quality in a standardized manner (not published yet, additional information is available in the FAO/INFOODS webinar in data quality of food composition tables). The screening questions contain eight questions to evaluate the minimum requirements for FCTs regarding data presentation, food and component description and coverage, documentation and publication format. After answering to the questions, the FCT receives a score (maximum 120 points) and if the score is below 100 the FCT us considered of low-quality meaning that it needs substantial improvements.

The questions and answers for the FCT-CBC are available on the video ‘Quality of the FCT using FAO/INFOODS Evaluation Framework’. The final score was 75 (considering that the final database will be disseminated also in excel format) indicating that an improvement is needed. The main problems were the mixture of different denominators (e.g. data for some foods are presented on dry weight) and the inconsistency of nutrient definitions and lack of a precise identification. The review and an improved documentation will increase the total of points for the FCT-CBC to an acceptable score. 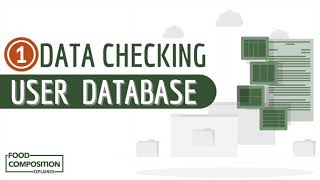 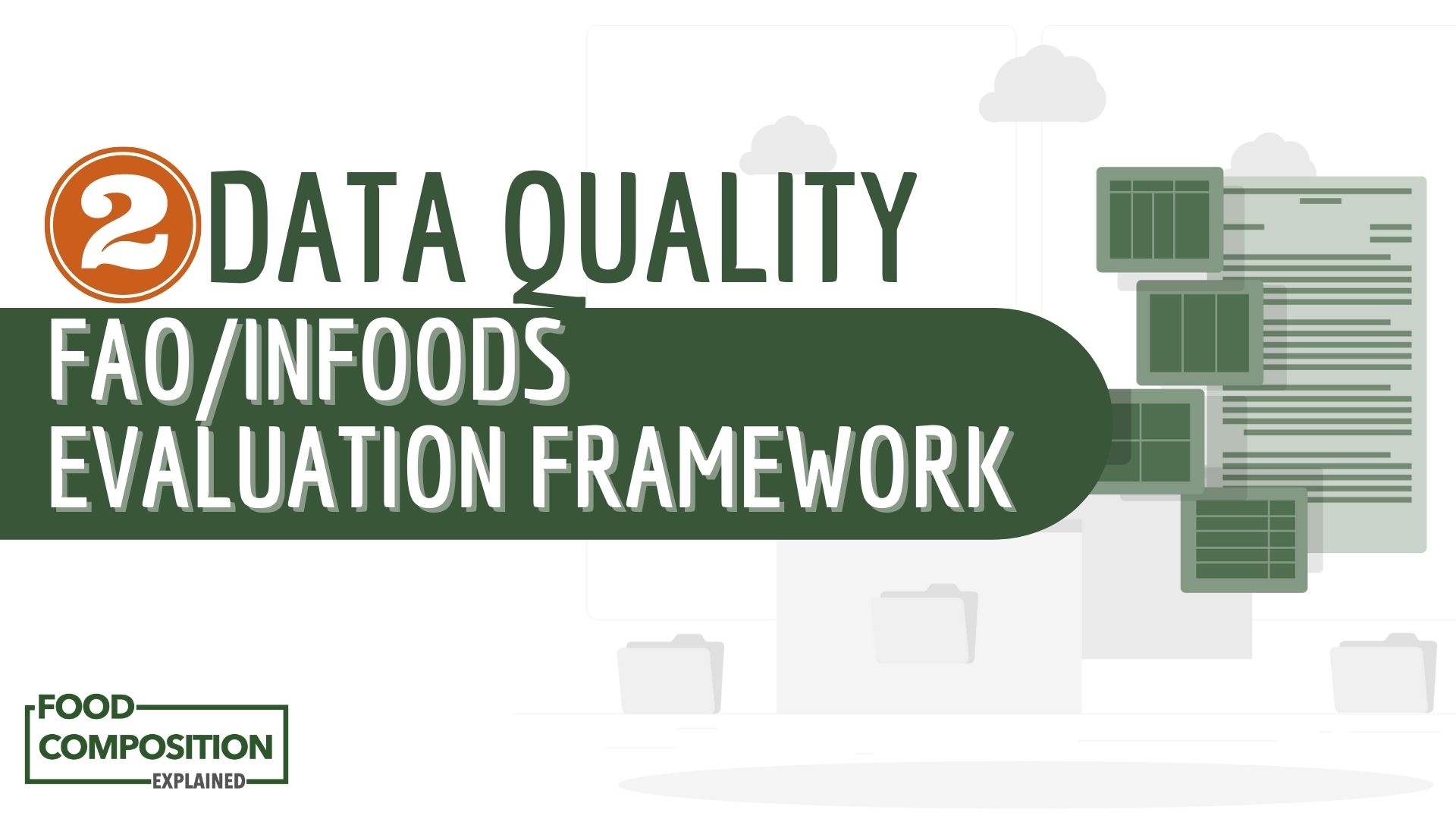 Mainly four FCTs were used during the compilation of the FCT-CBC. In order to access the quality of these datasets, the screening questions proposed by the ‘FAO/INFOODS Evaluation framework to assess the quality food composition tables and databases’ were also applied to each FCT.

The total score for each FCT included in the FCT-CBC are summarized on Table 1 and additional comments are also provided below.

Note: Maximum score is 120 and the FAO/INFOODS Evaluation Framework considers that if the score for a FCT is below 100, it should be considered of low quality and the FCT needs substantial improvements.
The five FCTs were compiled in a unique excel file to facilitate the data checking. Since the component’s documentation are not available yet, it was necessary to check their definitions in the original sources. To facilitate the process, each  component presented in the FCTs was linked to the corresponding INFOODS component identifier (tagname) which are of great importance for a precise identification of the data.
If different tagnames for one nutrient exist, it means that depending on the analytical method, mode of expression or definition used it will result in different nutrient values (Klensin et al., 1989) (to learn more about the importance of using the tagnames you can watch the video ‘Importance of component identification’).
The excel file including all data available in the five FCTs linked to the respective tag name are available for download at the end of this topic.

Represents the main dataset used in the FCT-CBC (reported as source of data for 91 foods).

Data presented in the Tanzanian FCT were derived from old FCTs, mainly from the International MiniList (1988-1992) and Kenya food database (1993). Some recipes were calculated but they were not performed to the INFOODS’ recommendations (nutrient retention factors were not considered).

The main limitation for using this FCT is that the components are not well described in terms of analytical or calculation methods and expression adding many uncertainties to the values (they may be based on obsolete methods since they were derived from old FCTs). The lack of documentation is important especially for fat, fiber, vitamin D, E, niacin and folate. Additionally, data for vitamin E data seems not correct (it is originally expressed in µg in the original source and when converted to mg the values are very low).
Therefore, my recommendation is that this FCT should be excluded (or at least taken as the last option). It this FCT is used to attribute a nutrient profile I recommend that all values should be checked for plausibility against data from another high-quality FCT.

Contains analytical data for foods consumed in Nigeria (compiled from literature or from unpublished results available from the authors).

Similar to the Tanzanian FCT, the main limitation for using this FCT is that the components are not well described in terms of analytical or calculation methods and expression adding many uncertainties to the values. The lack of documentation is important especially for fat, fiber, vitamin D, E, C, niacin and folate. Additionally, many gaps on the nutrient profiles (missing values) may be identified.

Thus, using this FCT as a source of data will also require carefully checking of the data against another high-quality FCT. Many components may also need complementary data from other FCTs to allow for a complete nutrient profile.

Published by FAO/INFOODS this FCT presents a very detailed documentation. A new version was released in 2019 which was expanded in terms of foods and components, including many recipes. It is advisable to use the 2019 version instead of the previous 2012 version.

Published by the U.S. Department of Agriculture, this is a very comprehensive FCT both in terms of foods and components. This FCT may be used, especially to fill the missing values from the other sources of data.

The Kenya FCT is also an African FCT of sound quality, but it was not used during the compilation of the FCT-CBC. I suggest that it should be included as potential source of data if needed during the review. 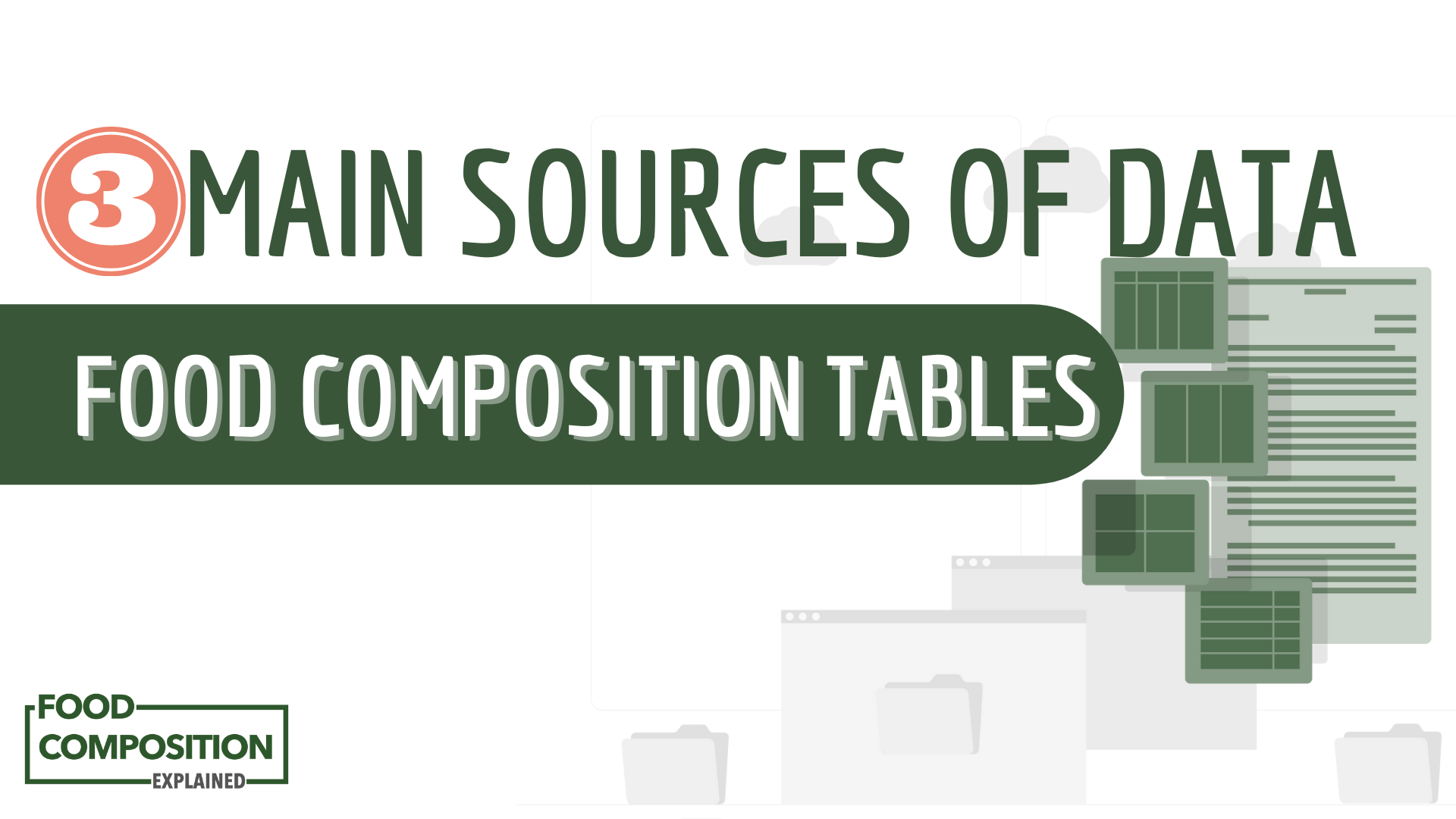 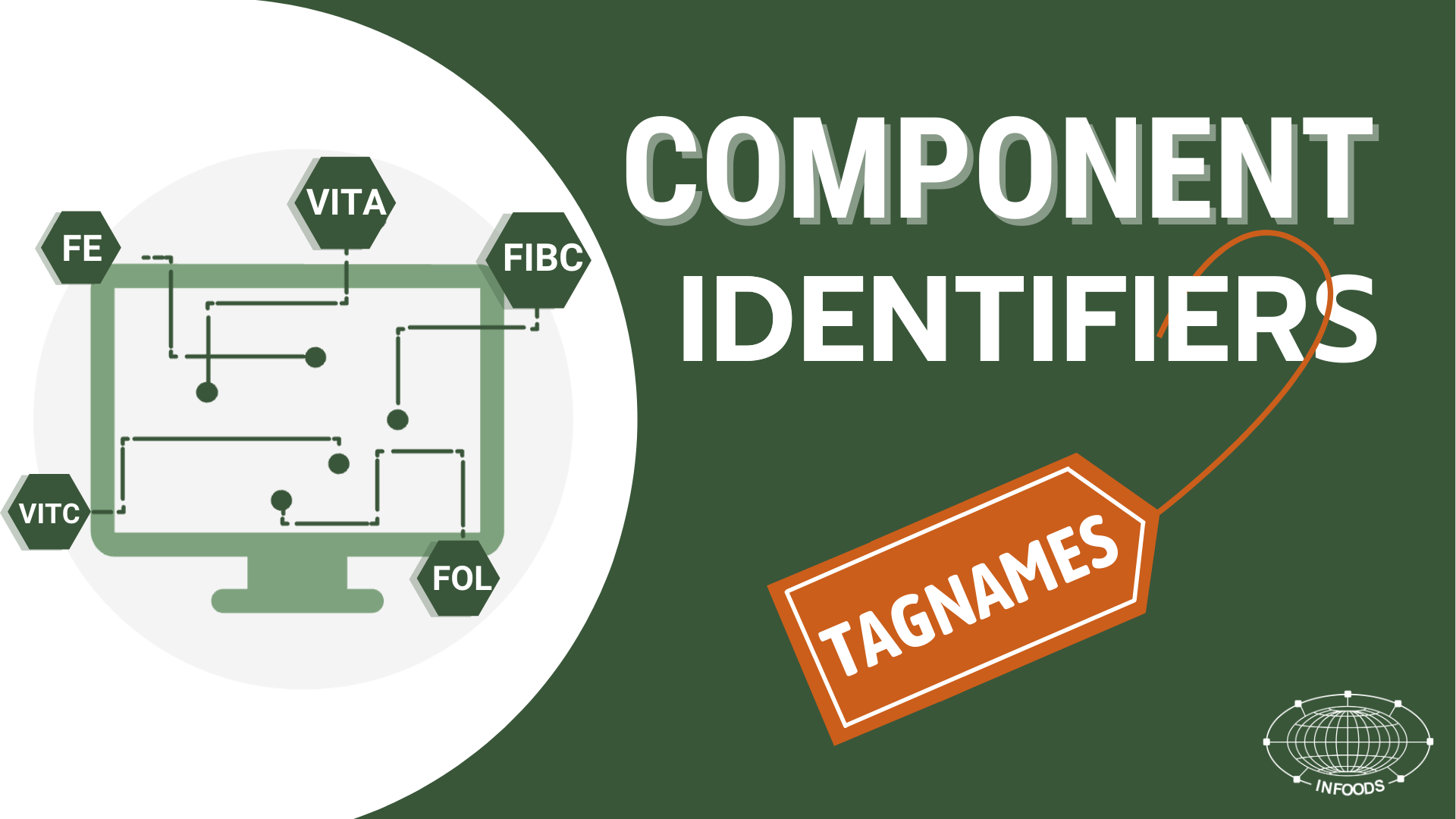 Data from more than 130 scientific articles were compiled. This is a good approach since it reflects the composition of local data, even though it is more time-consuming (for compiling and checking). Given the relevance of such data it is of great importance to check their appropriateness for inclusion in the FCT-CBC.

Although the different levels of data management are identified in the database, the documentation is not enough to allow the identification of the data source for all values presented in the database (you can find additional information about this topic in the video ‘Compiling data for FCT/FCDBs’ linked below). Thus, to facilitate the data checking some changes in the structure of the database were performed:

The main issues identified in the compiled articles were: 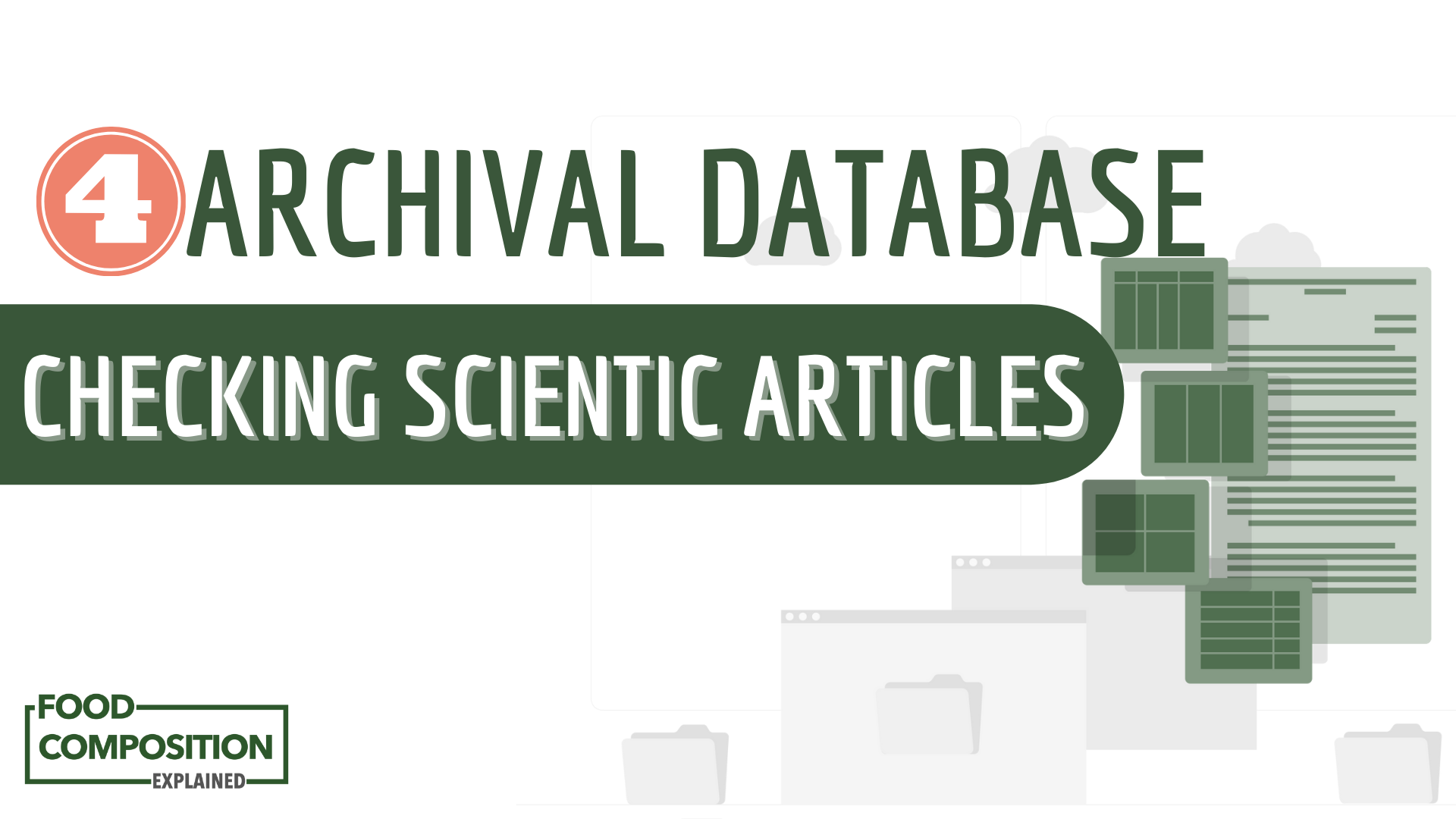 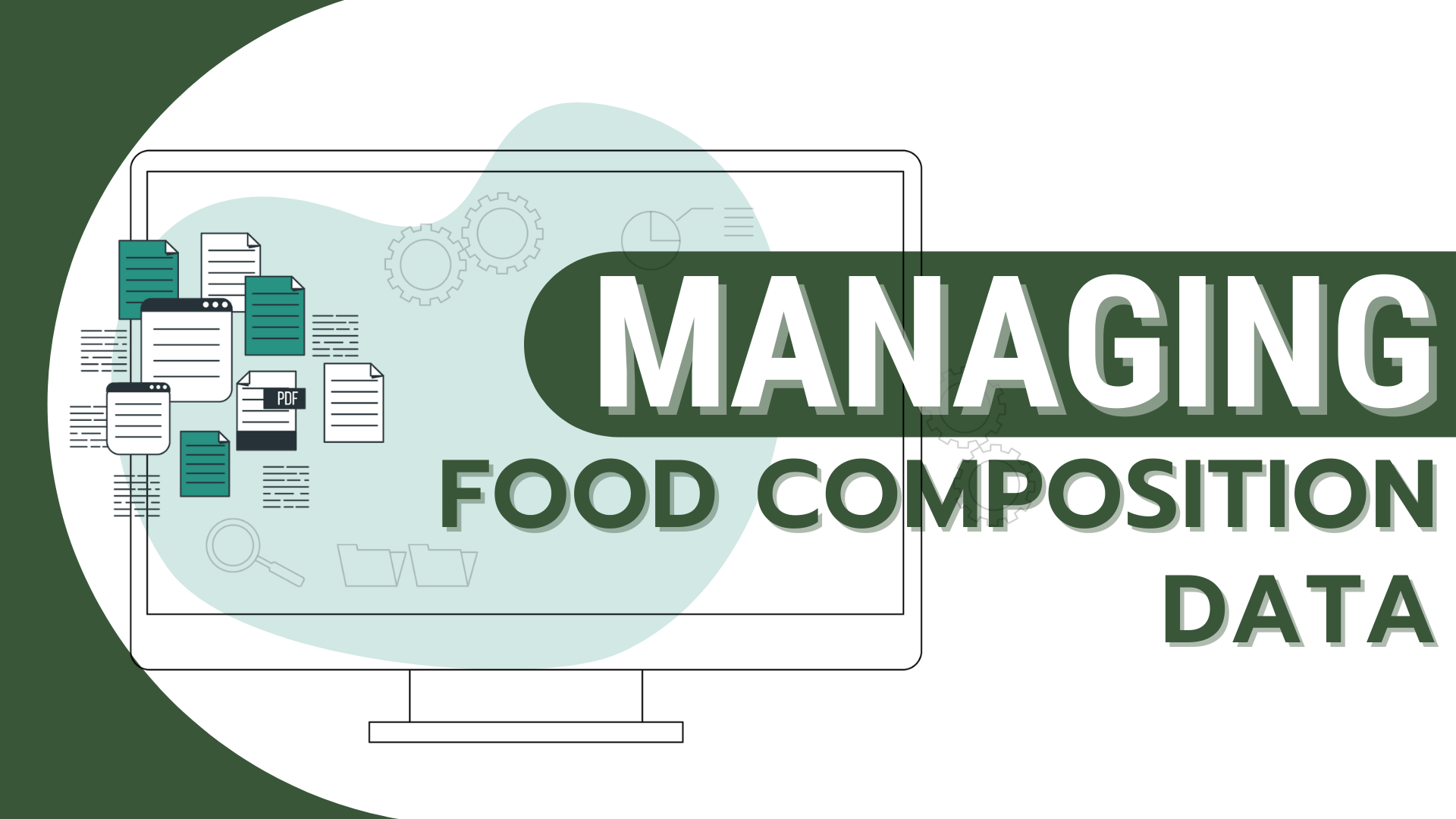 The data documentation to allow the assessment of the reference database was not available in the excel file, therefore, before starting the data checking a new ‘reference database’ was compiled to allow a detailed comparison of the original data against the foods included in the user database. The review was documented for each food (in columns T, U and V) and specific comments and recommendations were provided in the excel file (link to download the excel file is available at the end of this topic).

A summary of the checks and changes performed on the reference database are listed below: 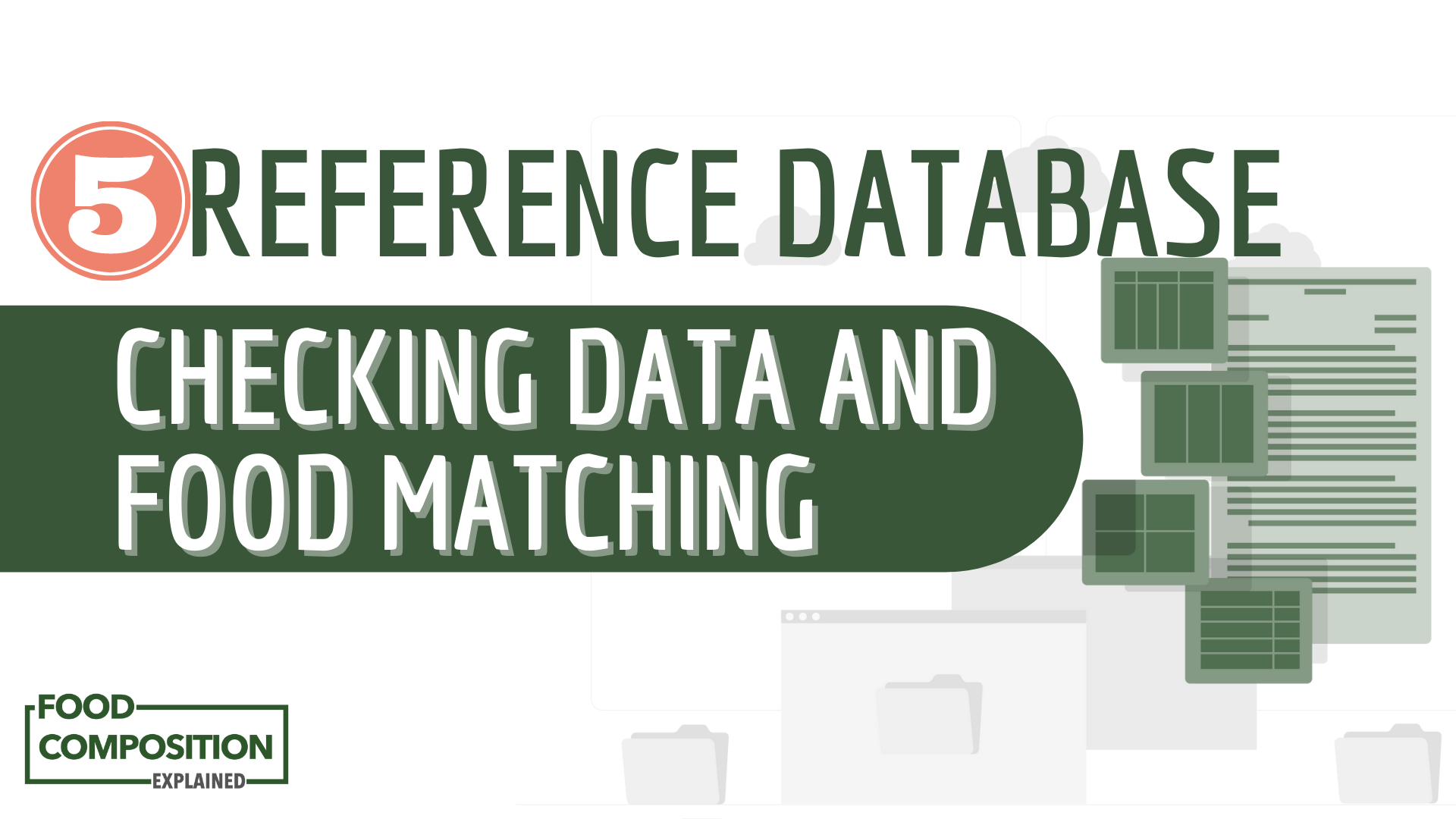 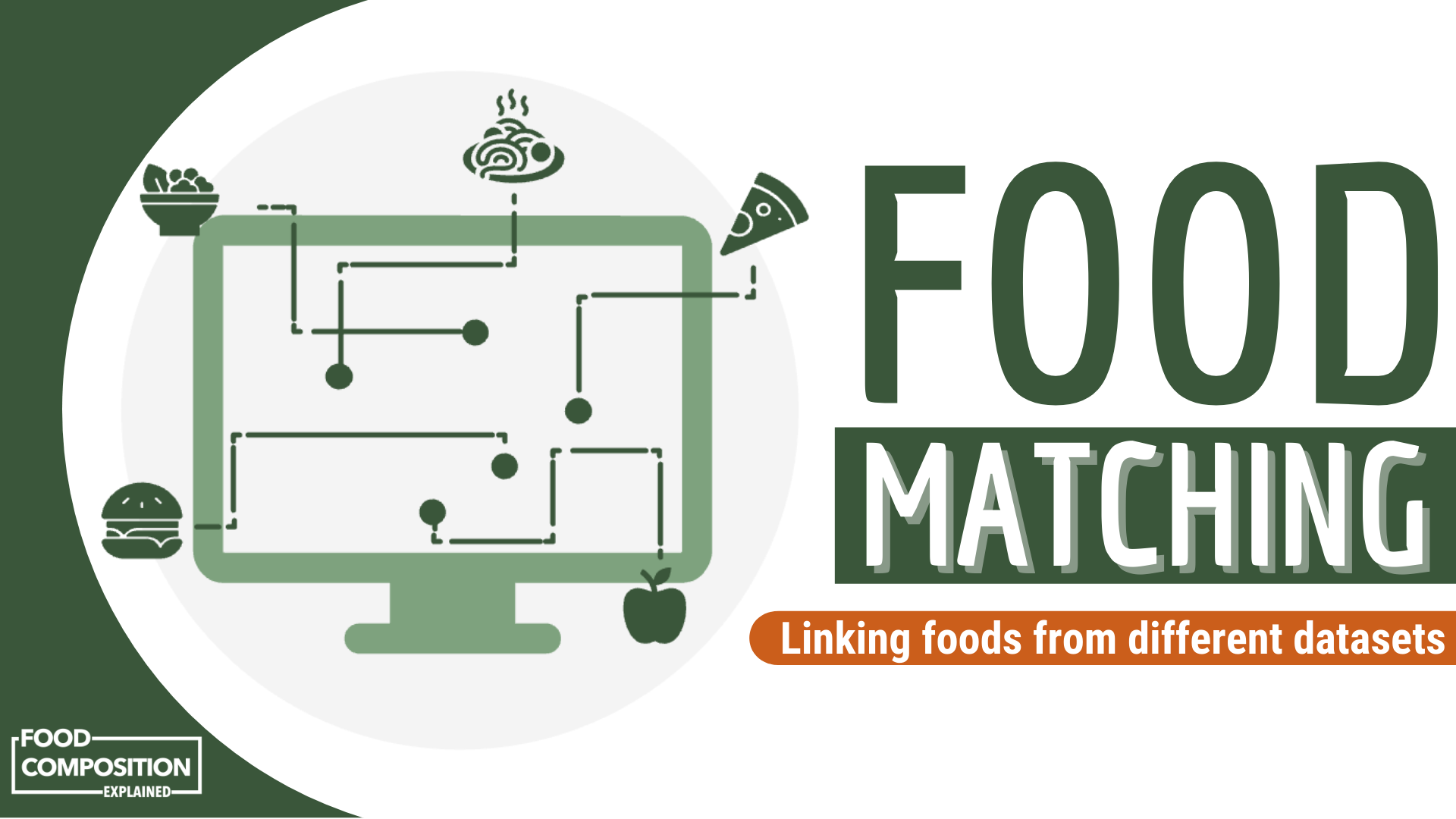 Complementary video: 'How to link foods from different datasets?' 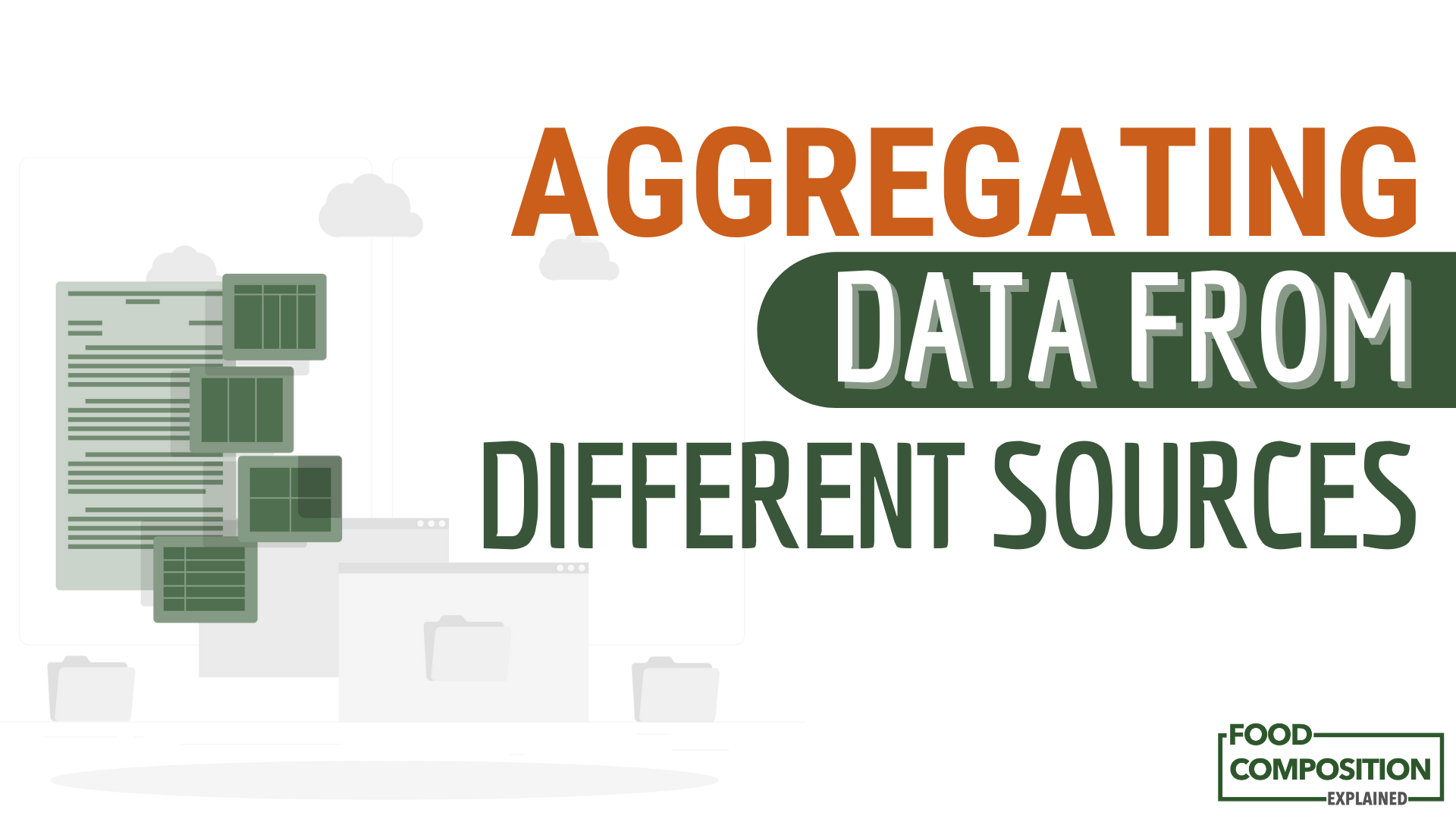 Example: How to borrow data from FCTs? 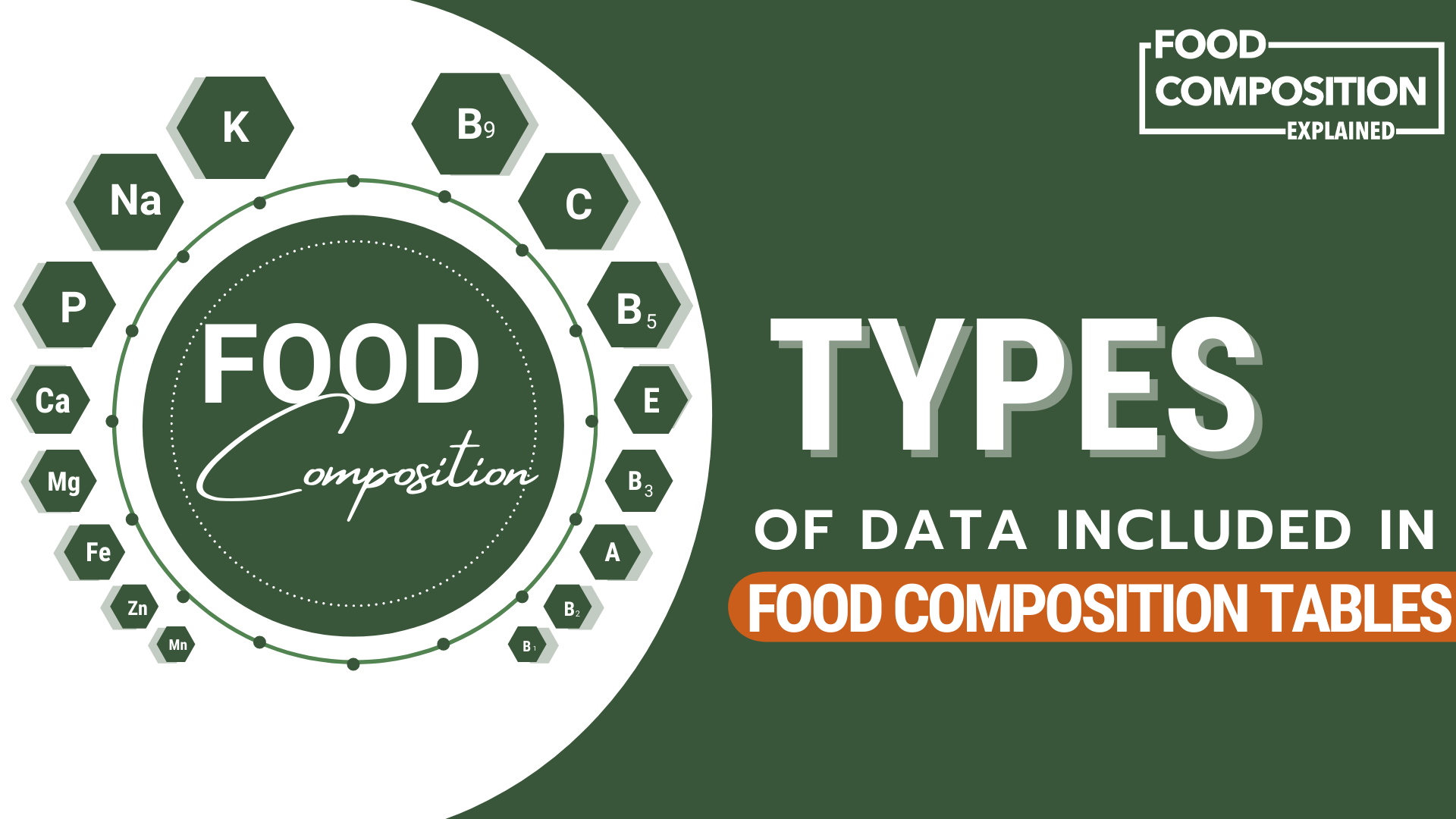